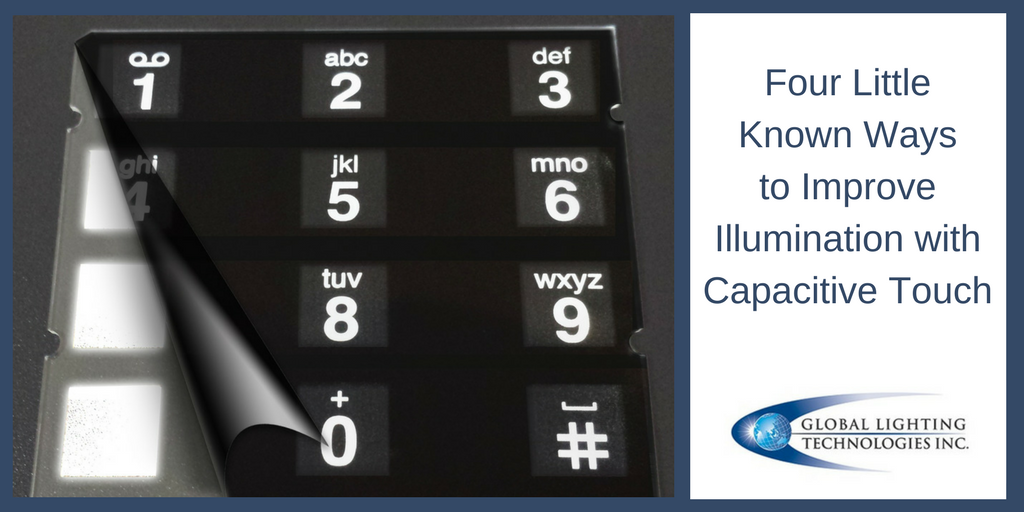 As capacitive touch moves into an increasing number of products, it’s essential to understand more about how they work. These sensors aren’t just on smart phones or tablets any longer. They can now be seen on many other types of electronics, automotive instruments, and even home appliances. Therefore, it’s also important to learn more about how they can be improved. One area that should demand particular attention is the backlight of a capacitive touch system. Let’s examine a few ways in which this type of backlight can be deployed with increased effectiveness.

First though, what is a capacitive touch sensor?
Capacitive touch systems rely on and respond to the actual human body and its electrical properties. This is what enables light touches, flicks, or scrolls to be effective on something such as a smart phone, and it differs from resistive sensors, which work based on pressure.

So how can backlighting be used and improved?

Thinness: The thinness of the lightguide is absolutely essential. This is because it’s placed between the sensor itself and the cover layer of the screen. By nature, it is also an insulator with polymer material, so therefore it’s actually interrupting the capacitive field.

By creating thinner lightguides, less interruption and superior results can be seen. There are now lightguides that can be used that are ultra-thin, as little as 0.25 millimeters or even less. This results in limited loss of sensitivity.

System Efficiency: The efficiency of the system used, and the LEDs themselves, changes the quality and consistency of the backlighting. For instance, when side-firing, high efficiency LEDs are properly focused by one of those high performance ultra-thin lightguides, the result is a uniform light that is free of hot spots and dark areas.

Design: Sometimes overlooked is the design of the lightguide in terms of how the LEDs are placed and utilized. By spacing a smaller quantity of LEDs along the edge of a lightguide, efficiency increases further. This not only offers superior control and consistency, but also improves the bottom line of production and usage. There is a lower part count, with fewer LEDs required, and power consumption is decreased.

Use with Dead Fronts: An efficient, quality lightguide can be used with a dead front, which is a cover that simply appears as a blank screen. Once the lightguide is illuminated however, the logos, text, or whatever other graphics are there, become visible. When the lightguide is not as efficient or consistent, the graphic appears dim or not uniform.

Global Lighting Technologies is a leader for all types of backlight technology, with products and solutions available for businesses in many different industries. Contact us here to learn more about what makes us different and how we can help for capacitive touch screen backlighting or any other specific application.