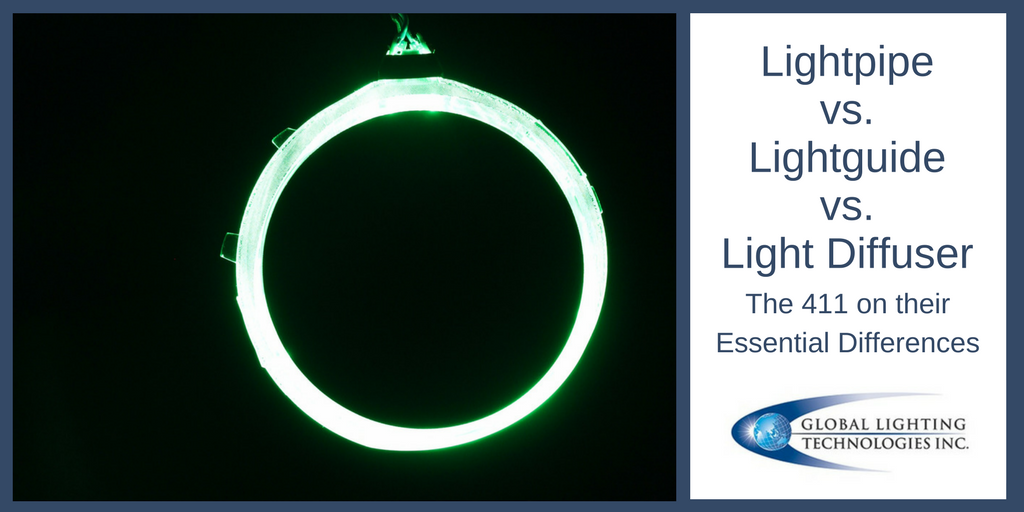 Lightpipe vs. Lightguide vs. Light Diffuser: The 411 on Their Essential Differences

There are many similar phrases and terms used across the fields of backlighting, illumination, and similar technologies. This has created some confusion along the way, which can make it difficult to understand product options and their applications.

It’s important to clear up any lingering concerns. Let’s take a look at the differences between a lightpipe, a lightguide, and a light diffuser. We’ll look at each in detail to help shed some…well, light on the subject.

Lightpipes
What’s a lightpipe? A lightpipe transports light from a light-emitting diode(LED) source to an emitting area, typically on a different surface or separate area from the actual location of the LED. Lightpipes are made from an optically clear polymer, such as polycarbonate (PC) or acrylic (PMMA).

What’s a lightpipe used for? The main application for lightpipes is to illuminate small areas, such as power indicators, while maintaining the focus of the LED intensity to a high degree.

Lightpipes can also be used to simulate the LED being at the top surface of the product, even when positioned on a Printed Circuit Board (PCB) below the surface. Further, long lines of light can be created by using long square or cylindrical tubes to emit light in radial patterns down their length.

Lightguides
What’s a lightguide? A lightguide manipulates, or guides, the light to illuminate over a larger surface area. Lightguides, like lightpipes, will also be made from optically clear polymers, such as polycarbonate or acryclic.

What’s a lightguide used for? Lightguides are used to take light from a single LED source and illuminate it evenly and efficiently over the entire surface of a Liquid Crystal Display (LCD).

Lightguides are also able to take the focused light from an LED and spread it evenly, and change its shape or distribution to achieve a desired end result. This can be seen with LCD illumination of logos or overlays, or other large areas.

Light Diffusers
What’s a light diffuser? A light diffuser reduces the intensity of light from an LED point source, and spreads it over wider viewing areas. As opposed to lightguides and lightpipes, a light diffuser will be made from an optically opaque material.

What’s a light diffuser used for? Light diffusers are used to increase the viewing angle of light being emitted, and to spread that light out over larger areas. They can be placed directly over an LED, or at a further distance. Light diffusers can also be used as the top surface of a lightguide or lightpipe.

Global Lighting Technologies is a worldwide leader for producing high-end, custom lighting solutions for many industries, including the automotive industry. Browse our website to learn more about our lighting products and to find the right match for any upcoming lighting project, whether it’s a customized design for a lightpipe, a custom lightguide need, or a project that requires the use of a light diffuser – or a combination of all of these.